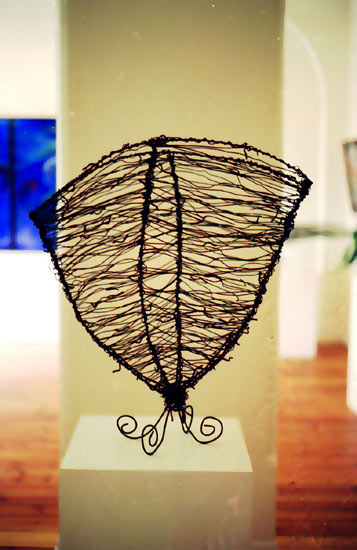 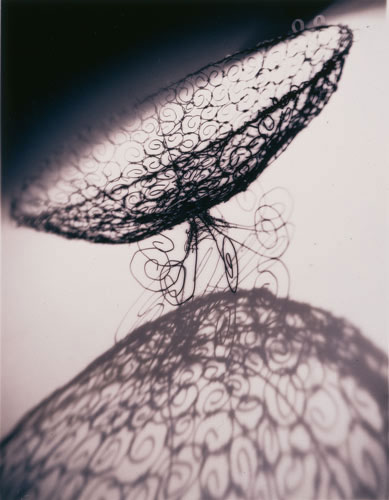 Call it Aussie ingenuity, but New York’s Guggenheim Museum shop is selling rusty Daylesford fencing wire. Not that it’s recognisable as such once sculptors Peter and Chelly Grey have finished with it. The pair create bowls, fire screens, lamps, birdcages and more from recycled wire – and the famous museum loved it. The rococo curves and arabesques that the pair bend into the wire creates the sort of furnishings that Michael Leunig’s Mr Curly would feel at home with.

The couple, both in their late 20’s, studied ceramics and sculpture at La Trobe University and began working with wire after they graduated and moved to Daylesford. “We wanted an interesting bird cage and couldn’t find one so we made one from a bale of discarded wire,” says Peter. The quirky Victoriana –style cage “had big holes in it because we don’t believe in keeping birds in cages”.

Daylesford’s Convent Gallery snapped it up and from then ceramics took a back seat. “There are the most amazing shapes you can make with wire that you can’t with clay,” says Chelly. “We just found it a beautiful medium to work with,” Peter adds. They revelled in the freedom of wire’s anti-gravity effect, where large shapes can be safely balanced on tiny bases.

“Wire is something that is so functional, yet is such an interesting medium to work with – it’s quite harsh on the hands but you can create such beautiful forms,” Chelly says. Their work has a wild, organic feel, a long way from the wire’s original use for boundary fencing and bailing. They use only old weathered wire, sourced from metal and scrap yards and the occasional understanding farmer. The pair prefers the colours and patina of rusted wire. “It is warm, it’s not as harsh as shiny metal and it suits our style,” says Chelly.

Each item, designed and made in tandem, takes a long time to finish. About half their work is commissioned and buyers are often people with contemporary, uncluttered homes. “Our pieces work well against plain walls – the lamp shades cast the most incredible shadows,” says Peter.

Despite the fact that their export market is expanding – thanks to the Guggenheim connection they are investigating new outlets in the US and Britain – the Grey’s don’t want to live anywhere but Daylesford. Their idyllic-sounding old sandstone house backs onto the Wombat Forest. “We prefer to be isolated and not be influenced by other peoples work,” says Chelly. “You open the doors of the studio and you’re looking out over the bush”, says Peter. “I don’t think we would be doing the pieces we are doing if we were in a backyard in Melbourne.”

Shades of Grey work is on permanent display at the Convent Gallery. Commissions are available.