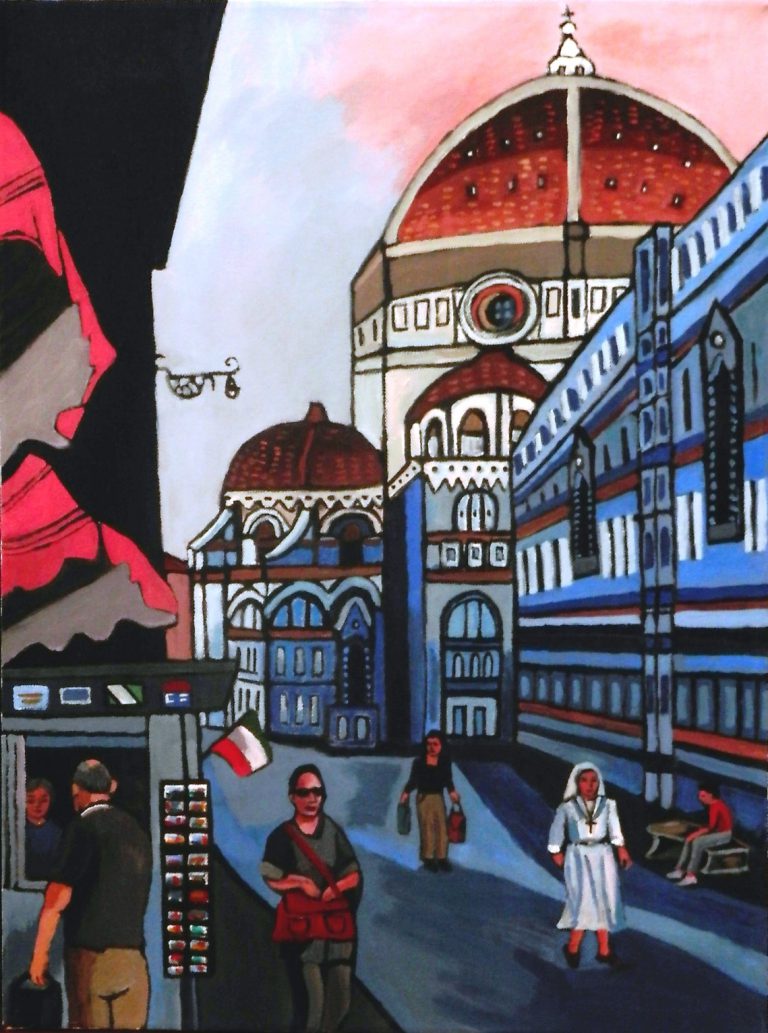 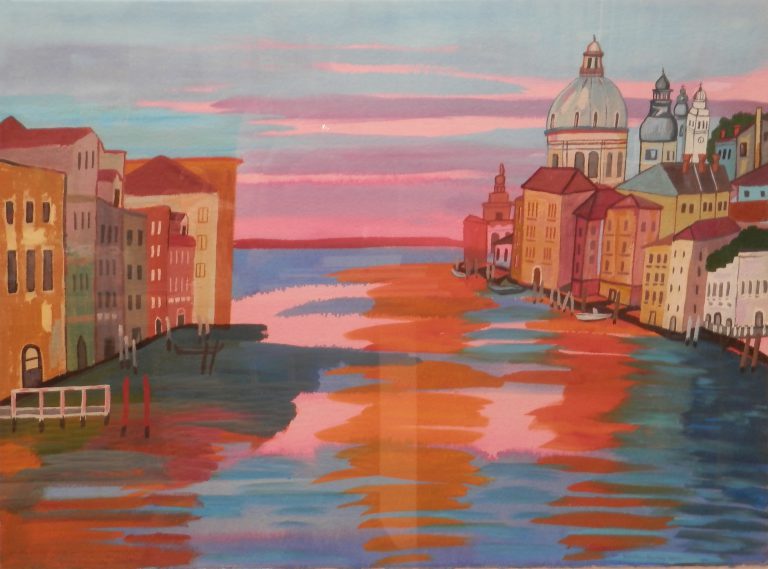 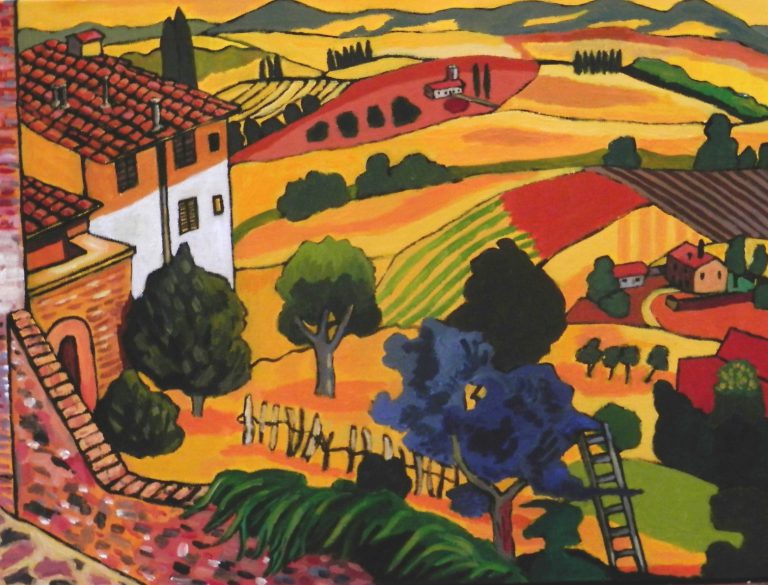 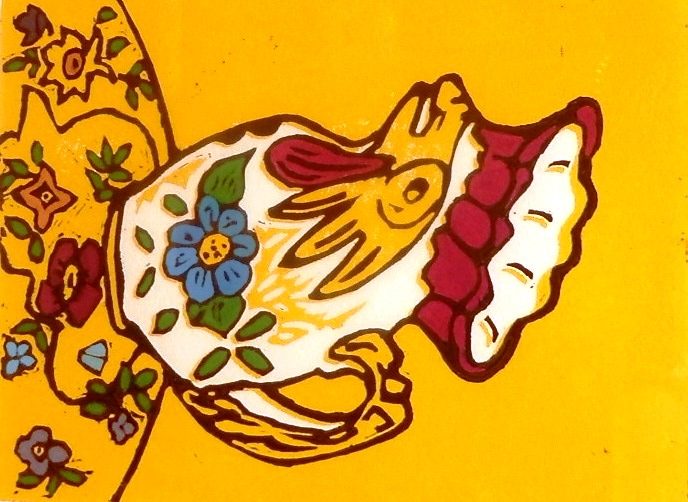 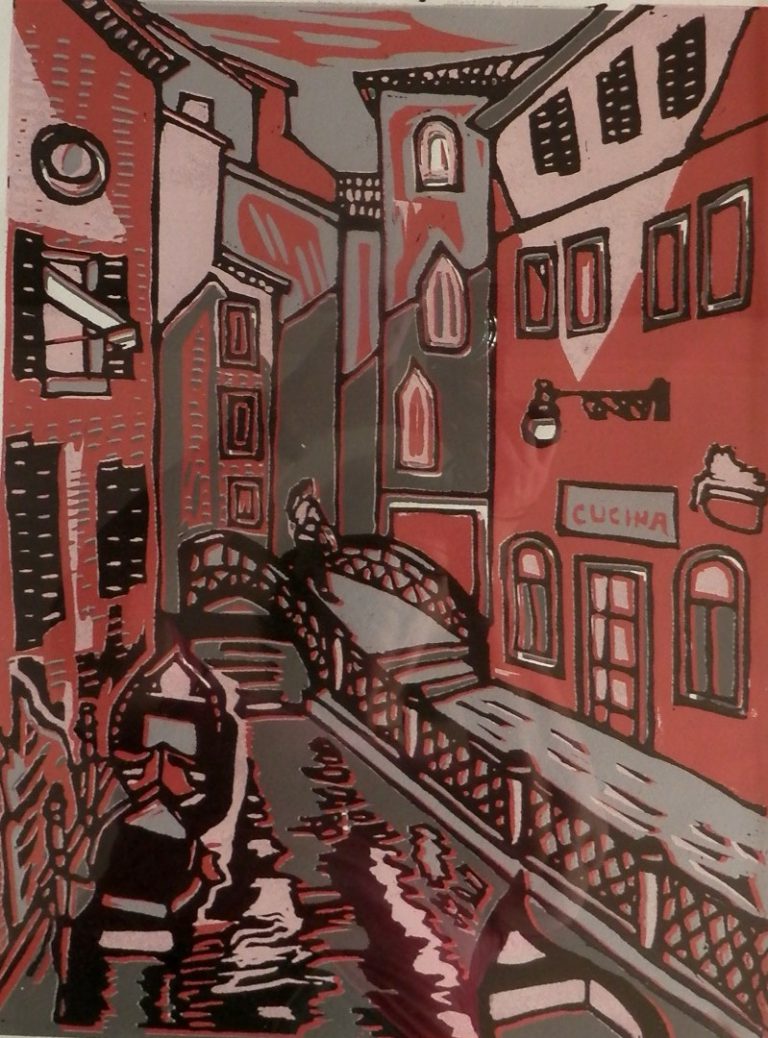 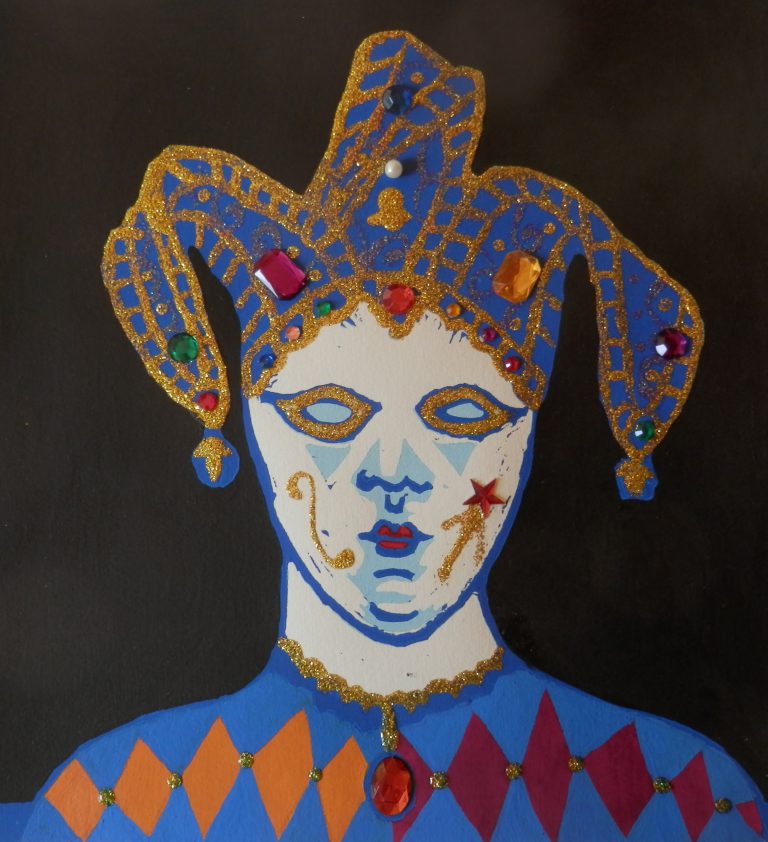 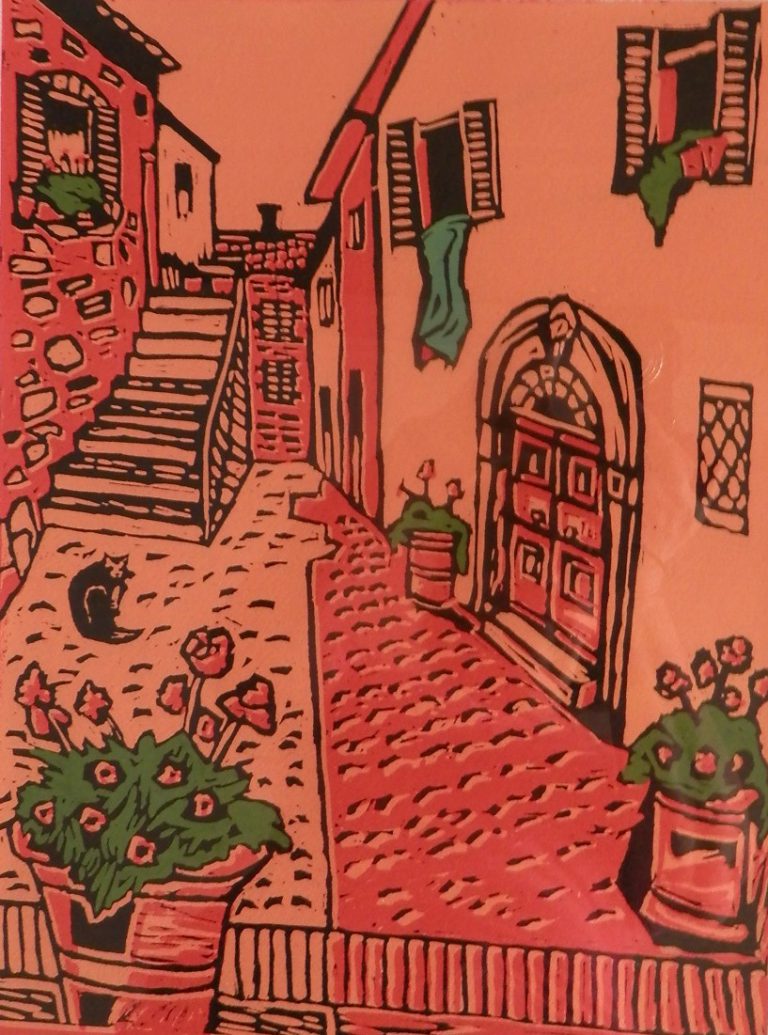 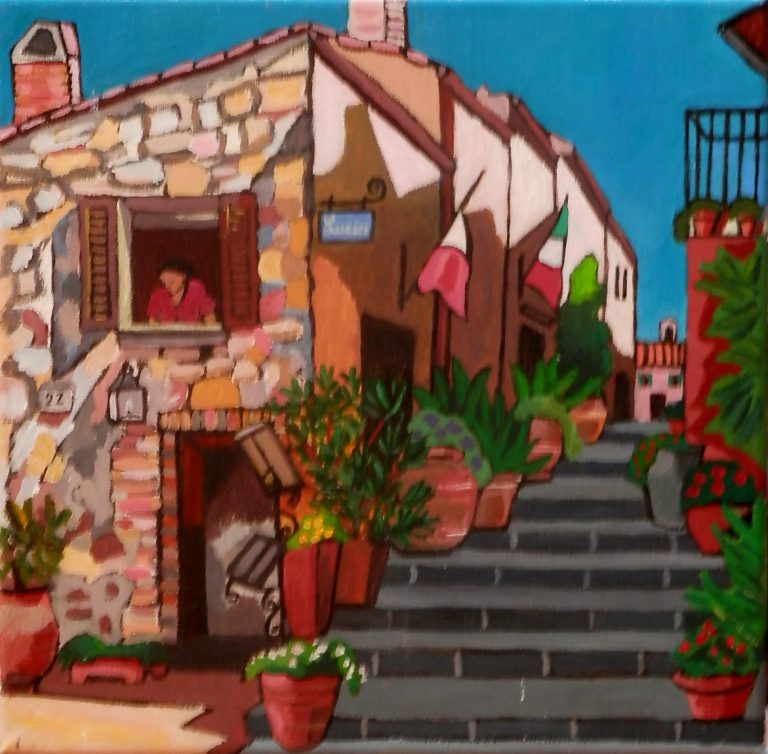 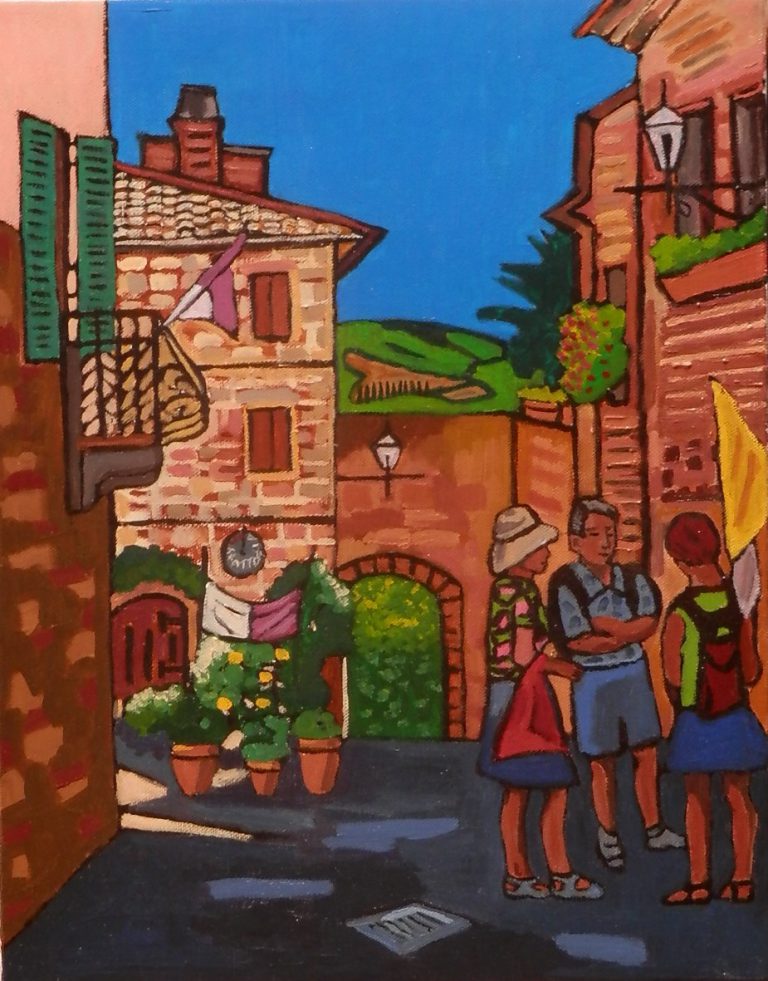 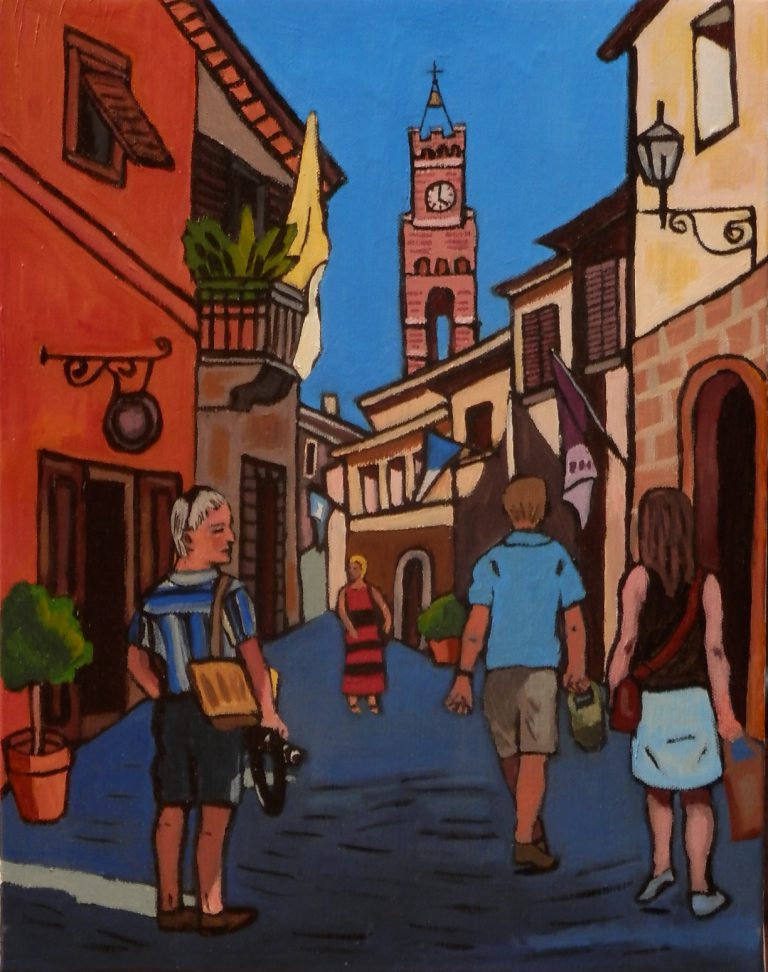 In September 2011, I went on my first trip to Italy and was so inspired by what I saw, that when I returned, I immediately started to paint my memories of this Grand Tour.

Rome was the first place we went to. My husband and I stayed at a hotel with a roof-top restaurant. We had breakfast every morning looking at ‘The Wedding Cake’ and domes of churches. I was very taken with hearing the bells chime every hour – they sounded so ancient and solemn. We went to the vast Piazza Navone every day and night and enjoyed the restaurants, musicians and artists. The Fountain of the Four Rivers by Bernini stood proudly in the centre with the Church of St Agnes in its shadow.  One day we went to Trastevere, south of the Tiber and marvelled at the buildings painted bright red, orange and hot pink.

Out of Rome we travelled to Orvieto in Umbria and saw the black and white striped Gothic Cathedral and beautiful ceramics. From there we went to Tuscany and visited many charming hill-top towns in the Val D’Orcia. I liked best the pink and ochre colours of the stone buildings in Pienza. We arrived in Florence and immediately fell in love with this cultured and fascinating city. The Ponte Vecchio (the Golden Bridge) at night was illuminated in a magical way and the reflections in the water were very intriguing.

We arrived in Venice and the excitement of that watery city was just palpable. I was too timid to ride in a gondola but loved watching them from the little bridges over the canals. The magnificent Santa Maria della Salute carved a special place in my heart. Our last stop was Lake Como and Lake Maggiore. The colour of Lake Maggiore as seen from Isola Bella was a deep sapphire blue.

Returning home and wondering how to translate all of these experiences into paintings, I decided to buy linen canvases made in Italy. I primed them with the earth colours I saw there – terracotta, burgundy, yellow ochre and dark red. Italy is such a Romantic place and I imbued my paintings with subtle traces of love. The images that inspired me were the ones seen early in the morning or at dusk. I have also been excited by the contrast of light against dark and in the concept of duality, so in this exhibition I wanted to capture the deep shadows of the narrow streets and the blinding light of sun bouncing off pale stone walls.  My first trip to Italy was just a taste of its wonders but I am sure it won’t be my last.

1996 A Fetish for Food, Chapel Gallery at Chapel Off Chapel

2006 The Jug and I, Meeniyan Art Gallery, Access Gallery

2008 Home and Away, Cambridge Studio Gallery

1995 Quirks and Queries, The Women’s Gallery

2006 Swinburne University of Technology, Faculty of Business and Enterprise.