About | History | Tina Banitska – our Lady

The story of the Convent Gallery in Daylesford has been recounted so many times it’s reached legendary status. 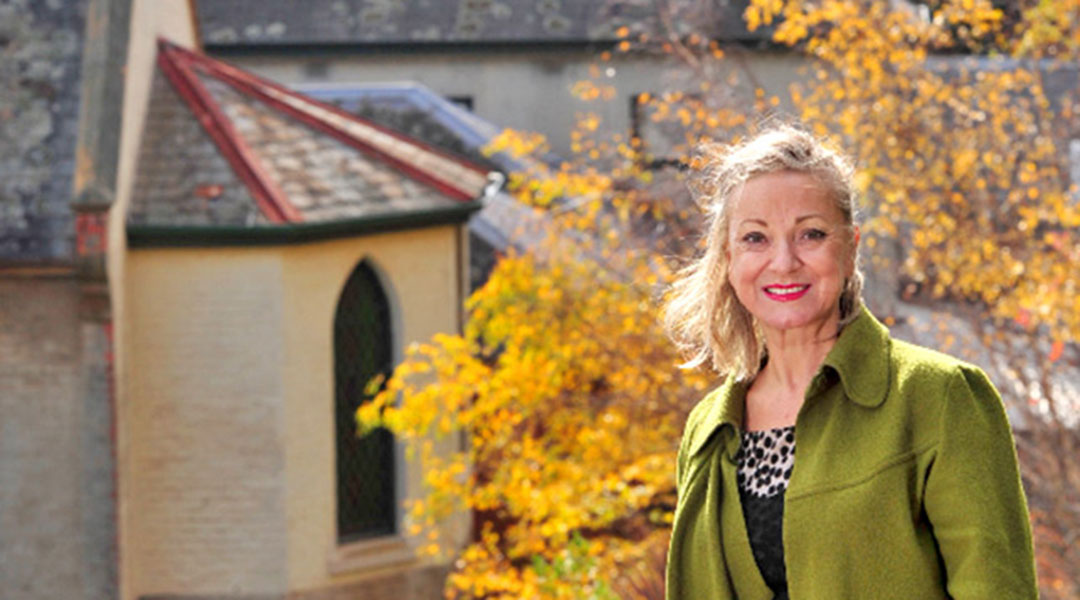 It’s the story of how, in the late 1970s, sculptor Tina Banitska drove into Daylesford, spied the tower of the Holy Cross Convent and declared to her friend: “One day, that is going to be one of Australia’s best galleries.”

Of how, a decade later, with barely any finances but a powerful sense of destiny being fulfilled, she took a massive loan to purchase the empty, crumbling building. And how, in the subsequent two years of renovation and delay, Tina sold many of her treasured possessions in order to pay tradie wages, opening in 1991 on the day the banks vowed to foreclose the project.

The fact the gallery has since doubled in size, now attracts 200,000 visitors a year to its art-filled rooms, cafe, museum and gardens – all the while continuing to service bank loans – underscores the legend.

But the personal story of Tina, her philanthropy and her vision for the future of rural Victorian art, is less known.

Wiping away tears, Tina – on most days an intensely private person despite her bubbliness – recounts the story of what has been her underlying driver at the Convent.

“Success for me is not about money or what you achieve. It’s about how you follow a dream, pursuing things your heart tells you is important,” she says.

“I’ve never seen this as a sacrifice. It’s been a huge blessing.”

Her greatest driving force, she says, was her impoverished childhood. The daughter of Greek migrants, her most vivid memories are of her hard-working, generous parents, Steve and Sophia, whom she now looks after. “I remember my mother, I would have been four or five, holding my hand and saying she had a shilling and should she spend it on vegetables or bread,’’ says Tina.

“It wasn’t about money, but choices, the decisions you make. That memory has never gone away. It makes me feel how everything is possible. It’s not about the barriers that stop you but where your heart is. Money is just a vehicle.”

Tina studied fine arts at Melbourne University and postgraduate sculpting at RMIT, before she was employed as an art consultant in Ballarat in the late 1970s. But it was while she was operating her Creswick Springmount Pottery, opened in 1981 and which she still operates today, that she had a vision for the historic 19th century mansion.

“When I heard it was for sale, all I could imagine was artists working together. I could picture it. I couldn’t sleep for two months, I’d wake with hot and cold sweats, I was very unsettled until I got it,” she says.

“I do believe in energies beyond what we understand. I think there was a plan somewhere for this.”

But when she took possession Tina admits she “cried for hours and hours”, such was the derelict state of the building, built in the 1860s. Yet she “never lost sight of what I wanted to do”.

“Even when I had a loan of $1.5 million at 18.5 per cent locked-in interest rates for five years it didn’t deter me.” When the Convent Gallery finally opened on March 31, 1991 – the same day the banks were set to foreclose – there were 5052 customers. “But we didn’t have an entrance fee and we didn’t have anything to sell,’’ she recalls.

In 2001 Tina borrowed more, nearly $3 million, to double the size of the gallery, incorporating a chapel and school, and now function rooms. Never has she applied for a grant.

These days, you can also stay at one of the two luxurious guest quarters, or hire out the Convent, which sits atop Wombat Hill Botanical Gardens, for a wedding.

Looking back she admits those early years “don’t seem real’’, with her average day now spent as an “office girl’’, working up to 14 hours with customers or cleaning toilets.

While not religious, she categorises herself as spiritual, believing in the “goodness and kindness of humans’’.

“I’ve been given the privilege of looking after this building, to make it a place for the community. I don’t own anything, I’m the custodian of it,” she says.

“It was all in the plan. I was just given the strength, courage, foresight and planning to make it happen.”

Tina Passes it on

TINA’S greatest love is mentoring young people. She estimates she has taken hundreds of budding artists under her wing over the years – dancers, fashion designers, jewellers, painters, not just locals but international exchanges as well.

At her Springmount Pottery in Creswick she offers artist residencies and workshops.

“This job is about people. It’s one of the reasons I set the Convent up, to share and interact and engage people,” says Tina, who has owned and sold several galleries in rural Victoria.

And it is that philosophy that underlies her latest project and vision, making her one of Australia’s great arts benefactors.

In 2002 she won the tender for the Sacred Heart Convent in Ballarat – five times bigger than the Convent Gallery – turning it into a mentoring school for artists. While there have been residential artists in the past decade, as well as historical tours and a dance studio, it is only now that Tina is planning to ramp up the project, creating an artists’ hub with scholarships.

“Art is the only inspiration we have to keep our hope going. It uplifts the spirit.”