The Convent at Daylesford has had a long and interesting history, from its origins as a private residence during the gold rush era of the 1890s to its current incarnation as a magnificent art gallery, cafe, wedding venue, with decadent accommodation and exquisite gardens. 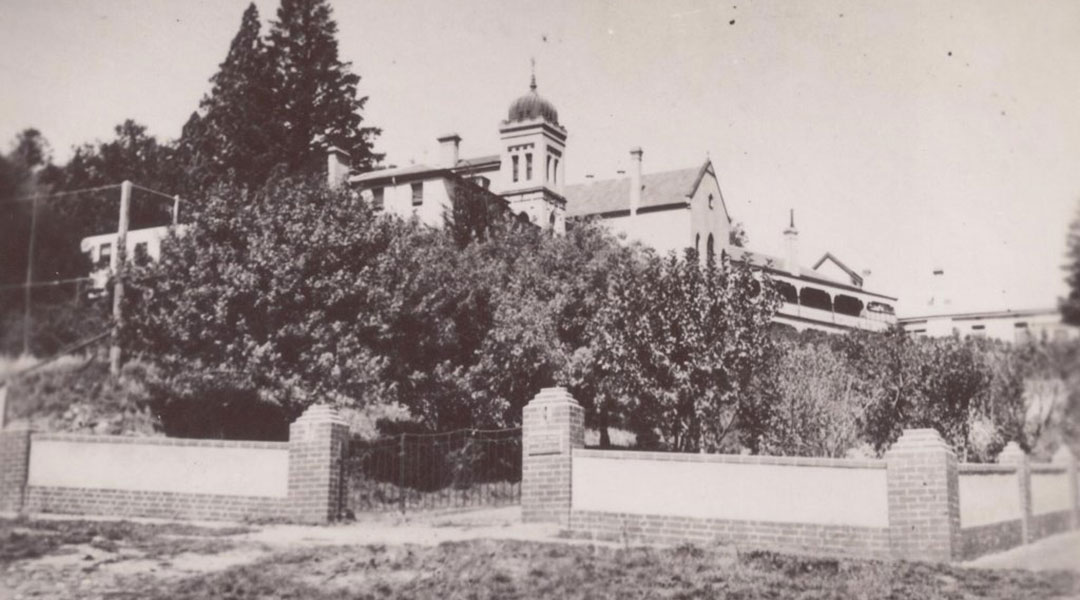 The Convent’s origins date back to the 1860s Gold Rush. Built as a private residence for the Gold Commissioner, it was then known as “Blarney Castle”. The Catholic Church purchased the building in the 1880s for its presbytery, but after ten years it was recommended that the priest, “being denied many things that were conducive to comfort”, should at least have a good house to dwell in and a new presbytery was built.

In 1891, Archbishop Carr of Melbourne envisioned a “source of light and edification” for the Central Victorian community of Daylesford. This vision was realized in 1892 when the building was deemed appropriate for nuns and boarders, and the Holy Cross Convent and Boarding School for Girls was opened. It was the first Victorian establishment outside of Melbourne by the Presentation Sisters. Extensions to the building were erected at a cost of £4,300. With the debt almost extinguished, the nuns proposed a badly needed addition – a new chapel. In October 1904, the new chapel was completed at a cost of £1,600. In 1927, the north wing was built, the parlour, dormitory and music rooms were added. The Reverend Mother made an appeal throughout the whole parish to raise funds.

The quiet routine of the Holy Cross was greatly disturbed by the effects of World War II. After the bombing of Darwin, and the discovery of submarines in Sydney Harbour, people in Melbourne panicked and tried to get their children away to the country. The boarding school became crowded and the boarders’ dining room was turned into a dormitory. There were beds in corridors, balconies were closed in to make more room, and the boarders used the Sister’s dining room.

The building reeks of history. It seems to seep through the walls and up through the original Baltic pine floors. In one cell, you can see the burnt patch where a candle had fallen, and in the courtyard, at the rear of the building, a smoke room was erected in the wall, to cap a 175 ft deep ventilation shaft down to one of Daylesford’s biggest mines.

The long, narrow, third and top floor has been left in its original derelict state – an eerie reminder of years past. It is here, between the flaking plaster walls, that the air is thick and almost tangible with history. This room “closest to God” had been used for the nuns’ infirmary built in 1954. Adjoining this room is the old Bell Tower and from here one can admire a glorious, panoramic view of the town and beyond.

The old convent, magnificent though it was, lacked adequate heating and required a tremendous amount of upkeep, inside and out. In the 1970s it was decided that more suitable accommodation should be found for the nuns. The building and gardens had declined into dereliction when Tina Banitska, a well-known local artist and ceramicist, found the courage and foresight to buy the property in 1988. Since the building was re-opened as a gallery on March 31st 1991, The Convent has undergone several stages of renovations to the building and grounds, far exceeding its original grandeur. The St Michael’s primary school was relocated to Smith St in 1994,  plans and renovations were started soon after, and completed in 2002 and is now two glass fronted function rooms, a penthouse suite and the Altar bar and lounge.

Following the closure of the boarding school 19 December in 1973, the Catholic Church asked that the building be used as a community centre where locals could share time and talents and acquire the knowledge and skills needed for complete well-being. Classes were taught in crochet, artex, first aid, cake decoration, table tennis, physical training, typing, St John Ambulance, dress making and literature.  Tina has reinforced these values by providing a place of enlightenment for all and an inspirational space for artists of all styles and calibre to express themselves.  In 1975, carpet and heating were added to several rooms, making it warmer for the nuns in the cold weather.

The building itself is a superb piece of art, retaining many of its Victorian architectural features. The imposing structure, located on the slope of Wombat Hill overlooks the picturesque and salubrious Central Highlands twin towns of Daylesford and Hepburn Springs, which have long been known for their plentiful supply of natural spring mineral waters.

Today, the building houses seven individual galleries, a large retail area, a café, a lounge bar, a penthouse and two function rooms. Kept as a reminder of the rich history of the building are four tiny cells, which were the nuns’ bedrooms. Many boarders have returned to “the Convent”, and with trepidation, approached the old nuns’ quarters, which had always been forbidden ground.

Today, over 120 years since its establishment as The Holy Cross Convent, the beautiful building continues to edify as ‘The Convent’ – a historical icon known for its celebration of art, history and culture.